Does One Bat in The House Mean More?

Does One Bat in The House Mean More?

Why its hard to know if there are more bats! 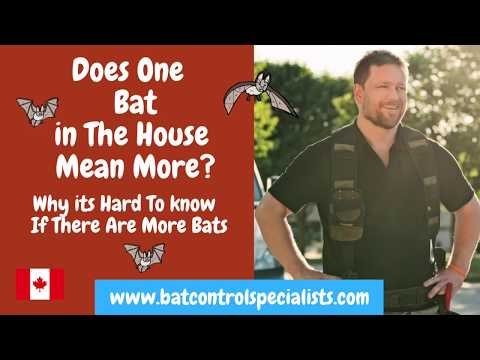 Does one bat mean I have more?

One of the most common questions homeowners ask me is “does one bat in the house mean I have more?”

The answer is most likely, maybe. But its almost impossible to know for sure. I’ll explain why.

Living quietly in millions of houses, across Ontario is a species of bats called big browns. It is estimated that more than 95% of all residential bat colonies in Ontario are big brown bats. Most enter and exit buildings high up and only need a tiny gap to squeeze into your roof. They are quiet, nocturnal and most of their colonies are quite small, which makes it easy for them to live in our houses unnoticed. It also means that in most cases, one bat does mean more.

During maternity season big brown bats split up with the males going off to live in different houses, sometimes in small groups but usually by themselves. In those cases one bat doesn’t generally mean more. But with a caveat. Still the bottom line is that the bat that came inside could a solitary male, a gang member or a female member of a small maternity colony. You could have a year round colony or a seasonal colony of one or several males. So how can you tell if the one bat you found inside means more? Unfortunately unless you see bats coming out of you roof at dusk (It’s generally difficult to spot bats entering and exiting buildings even if there are a few dozen) there is no way to know for sure.

By the way, when a bat shows up inside a homes most homeowners will initially and incorrectly assume that it came in a door or window. Most assume (hopefully) that it’s a fluke and therefore having one bat show up inside does not mean there are more. But that is almost never the case, even if it was a solitary bat. Having one bat does mean, there will be more, at least in the future. I’ll explain why.

Big brown bats show up inside houses because, most of the time they live in the walls of houses and not attics, which are generally too hot in summer and too cold in winter. After entering the roof they use gaps beside plumbing pipes and chimneys to get into the walls, and in many houses they can travel all the way down to an unfinished space like a basement or furnace room. Then they can easily move from room to room just by crawling under doors.

However regardless of the number of bats you have currently, they do leave scent trails that other bats can follow. The rule of thumb is even if you only have one bat enters your home you will get more. So one bat does mean more, even if currently there is not a colony of big brown bats living in your building. As always how often you will get bats in the future is unknowable. What is knowable is that they are all over your neighbourhood. Seeing a bat flying around inside or outside your home always means there are more.

So that is why the answer to the question “does one bat in the house mean more” is “Most likely maybe”.

In my experience (and opinion) the real question you should ask yourself is not “does one bat in the house mean more” but can you handle bats living in the walls? Can you handle bats showing up inside? If not you will need a specialist To bat-proof the building and exclude any resident bats. Please do not hire a jack of all trades wildlife removal company or pest control company to fix your bat problem. Watch our video “5 Common bat-proofing mistakes made by non specialists” to learn more about the dangers of hiring non specialists. That subject is covered in our other videos.

So to be ultra clear, having one bat in the house does mean more because….

The majority of the time it occurs in houses that have a small year round colony of big brown bats.

One bat means more because, the more bats you have living in the building, the greater the chances one will find its way inside your living space.

3. One bat does mean more because, even if its a small seasonal colony of males, they often don’t live by themselves.

4. One bat does means more because, even if it is a solitary seasonal bat, they leave scent trails that other bats can and will follow at some point.

5. One bat does means more, when you find a bat inside your home during winter. Big brown bats only split up during the summer months of maternity season, but come back together in late summer and will hibernate together in the same house.

If you would like to learn more about the dangers of having bats in your building, check out our website and youtube channel. If you are tired of wondering “does one bat in the house mean more?” and just want us to bat-proof your home and exclude however many bats that you may or may not have, call or email us today.