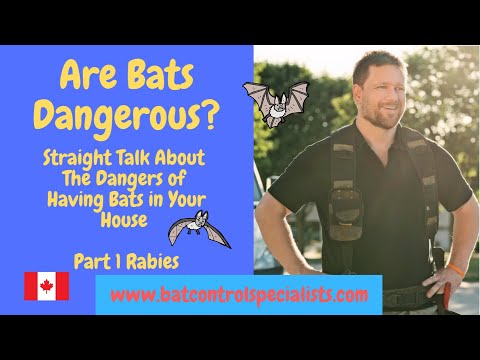 Every year we receive thousands of phone calls from homeowners across Ontario who discover bats inside their home. Many find them inside their bedroom or wake up to a bat flying around the heads.

Some of these people call me and ask are bats really dangerous? Good Question,

The answer is no, they are not dangerous, but if you find a bat in your bedroom or your kids

bedroom you are going to call your local health unit and ask about rabies shots.

in millions of houses, across Ontario. So having bats is not only not really dangerous it’s

It is estimated that more than 95% of all residential bat colonies in Ontario are big brown bats.

Most enter and exit buildings high up and only need a tiny gap to squeeze into your roof.

Bats are quiet, nocturnal and most of their colonies are quite small, which makes it easy for

them to live in our houses unnoticed. I suppose you could say that having bats living in your

danger. How dangerous is it to have a small colony of bats living undetected in your home?

covered in a bed bug like insect called bat bugs. (which are not dangerous to humans as they

can only live off of bats)

up inside their home.

with rabies. But millions of bat show up inside houses every year and rarely ever bite people. In

fact most are lost and scared and not looking to attack us. Most bites occur when people pick up

the bat deliberately or accidentally.

While many homeowners assume the bat came in a door or window, bats show up inside

houses because they generally live in the walls (not attics, which are too hot in summer and too

cold in winter). After entering the roof they use gaps beside plumbing pipes and chimneys to get

basement or furnace room. Once inside they move from room to room by crawling under doors.

That is why they show up in bedrooms.

know for sure they have been bitten. However There have only been 3 confirmed rabies deaths

attributed to big brown bats in North American history and never one in Ontario.

bat? Heck yes. Its that kind of Paranoia that keeps the rabies death rate so low in Canada. if

specialist bat-proof the exterior and humanely exclude them.

And Bat proofing a house is not simple or inexpensive. The real danger here is that hundreds of

houses. The biggest danger when dealing with a bat problem is that you are in danger of being

ripped off. People also spend millions of dollars on useless “repellers” which never work. The

every decade since the 1970s (repeatedly) by government agencies. They pay a big fine

dangerous illusions of safety and efficacy. Government agencys are also more of a danger here

given back to consumers. Dangerously incompetent and selfish government is a danger

But If you find a bat inside your home its is extremely likely that at some point you will get more.

they discover a way in, they will keep coming back. How often that will happen is anyones

bedrooms while you sleep.

guide to help keep the danger to a minimum. As always if you are not sure you can do this

please call a professional as the danger of rabies is always present when handling bats.

If you are certain that there has been no contact with the bat, here are the steps to follow to get it out of your home.

Step 1: Reduce the danger and reduce the risk. Isolate the bat. I always recommend that my bat problems customers close doors and the other parts of the house. Put a towel under any doors to prevent the bat from crawling under it and place heavy book over any heat register as there is a real danger that the bat will dive down the heat register and end up dead in your ductwork. Many of my bat problems customers lose track of the bat this way.

Step 2: Open a door or window as close to the bat as possible. The bat is not really dangerous but just lost and wants to get out of your home where it can find food and water. I always tell my bat problems customers the the bat wants to get away from all the dangerous humans. It will eventually (could take up to an hour sometimes) sense the fresh air movement and fly outside.

Step 4: Keep an eye on the bat. Try not to lose track of it. There is a real danger that it goes into a shoe or boot or hides in towel and may bite you if you grab it accidentally. Also many of our bat problems customer spend hours searching in the house/room for the bat if it goes into hiding. When it does fly out, it will be sudden – and quiet. It may circle the room from time to time before it discovers the open window.

Step 5: Removing the bat. Warning, handling a bat is dangerous! If the bat does not seem to be exiting the room on its own or you are feeling impatient, you can attempt to capture the bat and release it outside. When we are at work on a bat problems job, we always wear gloves and long pants when attempting to capture the bat because the danger of a bat biting you is real when you attempt to handle it. Here are a few methods.

Throw a towel over the bat. Once the bat is under the towel, scoop it up, making sure to wrap the bat inside. Be careful, the danger is that you can easily crush it!

Whenever we remove a bat for our bat problems clients, we usually place an empty laundry basket or wastepaper basket over the bat. Then take a newspaper, magazine or other similar object and slide it between the wall/floor and the bat. Make sure not to pinch the bat.

Use a small-meshed net to capture the bat. This is one of the least dangerous ways to catch a bat with a caveat (A large-meshed net may help you avoid the danger of handling a bat directly but it does increase the danger of injuring the bat as it may become entangled in the net and require you to use a more dangerous hands-on approach).

Attention! to all my bat problems clients. Please Do Not: Swing at the bat with a tennis racket or a baseball bat.

Step 6: I warn all my bat problems clients that you will hear a clicking noise which means that the bat is scared and may actually attempt to bite. Once you have the bat inside the towel or a container, bring it outside, some distance from the house. Make sure that any doors or windows are now closed. Remove the towel or newspaper and turn the container on its side. The bat should be able to get out and fly away. I remind all my bat problems customers that it is not easy for the bat to take off from the ground, so if possible, push the container or towel as close to a tree as possible.

Finally, I ask all my bat problems clients, please do not to harm or kill the bat.They are not dangerous blood thirsty monsters. The bat just got lost. It will not go attack you. However as I tell all my bat problems customers. We will need to bat-proof your home and exclude any other bats to prevent this potentially dangerous situation from repeating itself.