“This is easily and by far the best information about bats we have found on the internet.

It’s great peace of mind to find this after a couple surprise visits.”  T. Fleury. 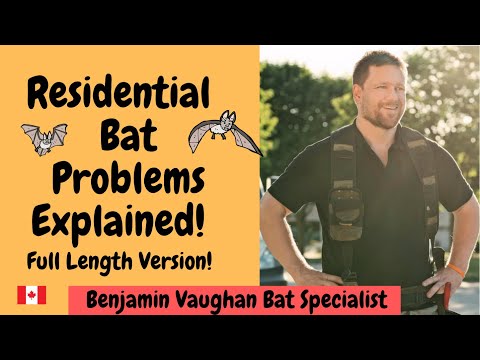 My name is Benjamin Vaughan, I am a residential bat problem specialist, here in Ontario, Canada.

And this article/video is about residential bat problems in Ontario.

There are two basic types of residential bat problem.

The most common is having bats show up inside your home.

The less common type involves homeowners seeing bats coming out of their house.

Residential bat problems are common in our towns and cities.

Big brown bats live in the walls and attics of our modern climate controlled buildings, probably because the stable temperatures are similar to those found in caves.

Probably the most amazing thing about residential bat problems in Ontario is how common they are.  Colonies of big brown bats live undetected in millions of homes across Ontario.

The majority of residential bat problems go undetected and most homeowners are totally unaware they have even have a bat problem.

This is only possible because the majority of residential bat problems are caused by big brown bats. Big brown bats are nocturnal, quiet and most colonies are small numbering 12-25 on average.

Most residential bat problem colonies are entering and exiting the building high up, primarily because they are terrible at taking off from flat surface. This is why they typically hang upside down as its easy to drop and begin flying. Usually bat entering and exiting a building up high are not seen and so go undetected.

Spotting them is very difficult also because they are super quiet. And most homeowners are just not expecting to discover they have a residential bat problem so are never looking for bats coming out of their home at dusk.

So by far the most common way homeowners discover they have a residential bat problem is when they find one or more bats inside their home.

This happens for several reasons number one being that most residential bat problems in Ontario involve big brown bats and big browns do not live in attics. They certainly hang out in them and pass thru them when going in and out. However attics are too hot in summer and cold in winter for bats to live in full-time.

Big browns live in the walls of houses, particularly the uninsulated interior walls as there is plenty of space between the studs where they can sleep, raise their babies and not be exposed to the extreme temperature swing in the attic.

Now most with most residential bat problems the bats colonies are confined to living in small areas in the upper parts of the wall. Their movements are usually limited by horizontal framing called blocking.

However the problem is that Ontario Building code allows plumbing pipes and ducts to be routed thru interior walls so in many homes the blocking that would otherwise limit the movement of bats is cut or removed entirely.

Another problem is that many modern houses have dedicated walls specifically built to house pipes, wires and ductwork, These lack blocking of any kind and bats movement thru them is virtually unlimited.

So some unfortunate homeowners will not only have a residential bat problem but, also have walls that bats can use to travel all the way down to an unfinished space like a basement or furnace room.

And basements and furnace rooms are the most common place where bats first show up. They also enter via pocket doors, loose mouldings and occasionally heat vents or cold air returns. But realistically any hole in a wall wider than an inch is big enough for a bat to enter.

And once inside bats easily move from room to room by crawling under doors.

Most residential bat problems are discovered during the hottest months of the year particularly in July and August. Thats when the populations are at their peak and overheated bats will pop inside your air conditioned houses to cool off. This is also the time of year when curious young bats go exploring and end up inside your home.

If left alone many bats will go back up into the walls. That is very confusing for homeowners who see a bat and then cannot find it.

Some bats that come inside are lost and unless they are caught and released outside will soon die of dehydration.

Ultimately the only way to fix your residential bat problem and stop the bats from living in your walls and showing up inside your home and is to completely bat-proof the exterior and humanely exclude them.

That subject and more are covered in our other videos.

We hope you enjoyed this video on the basics of residential bat problems in Ontario.

However if you have seen enough and just want our experts to fix your residential bat problem call us today.